The Scales of Justice

Yesterday was a day rife with legal entanglements. Evan had traffic court, I was planning to go to Town Hall to see what they would decide on some historic buildings here, and it was the day that a ruling in the Amanda Knox case was expected.

Evan's legal drama has been dragging on for months and months. During the first six months of having his license to drive he managed to have two accidents and earn himself no fewer than twelve tickets. Having gotten himself into the mess without help, he's been determined to clean it up by himself, too. He has quickly learned that getting into legal trouble is much easier than getting out of it again. The last time he went to court for this particular ticket, for example, he couldn't seem to attract the judge's attention. When they called for traffic violators who wanted to plead guilty, he raised his hand over and over, but was passed up each time. Finally, when he was the last person left in the room, the judge told him there was no time left and he would have to come back another day.

Last night he wore a bright red shirt, sat as close to the front row as he could get, and practically threw himself bodily in the air when they called for traffic violators. It must have worked, because court started at 7:00 and he was home again by 8:30. Yet the saga continues. We no longer own the car, so now it seems he needs to go back to court again, this time with a letter written by our insurance company verifying that we had coverage on our former vehicle on the date in question.  We can only hope that will be the end of it, but we really don't know.

As for me, I never made it to Town Hall last night. I got a phone call from a former client from the non-profit. He called me because he had received a letter saying that the person who assaulted him has been released with a much lighter sentence than what he had been told to expect. Since the man has threatened him repeatedly, he was very upset and worried. There wasn't much I could do for him, other than sit and listen to his concerns and assure him I'd put him in touch with the attorneys in the legal program in the morning. I don't have all the facts yet, but on the face of it, it seems that the system has failed him.

When I finally got home, I saw on the news that Amanda Knox had been freed and is already on her way home to Seattle. I hope this closes the book on this chapter in her life, but I rather doubt it. Like my client, I expect in the back of her mind she'll still always be waiting for the other shoe to drop.

I can certainly see why they say Justice is blind, but sometimes I suspect she can see just fine and likes to play favorites. Other times, I'm not sure sure she's even in the room.

I never did find out what happened at Borough Hall last night. I think I might need a second cup of coffee before I dare look into it. 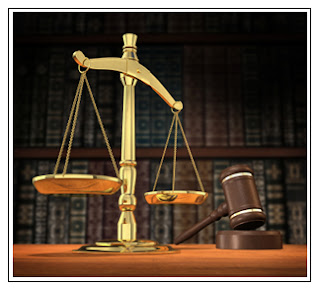