Crazy is like a Condiment, a Little Goes a Looooong Way.

I have never been a person who cared about having stuff. I've never been interested in fancy cars, big houses, dressy clothes or flashy electronics. I have simple tastes and don't need a whole lot to be happy. I can't claim any credit for that, it just seems to be how I'm built and always has been. But as I'm getting older, I do find myself craving some of the creature comforts of life. Little things, mostly--for example, I would give my eyeteeth to have a dishwasher in the next house I live in and if I was lucky enough to have a real backyard, too, well, it almost doesn't bear thinking about. It would just about be like winning the lottery!


Right now, we live in a second floor apartment in a tiny cul-de-sac off Main Street with a cast of crazy neighbors like something from a bad sitcom. We've got the pink-haired crazy cat lady with the homemade chicken wire fence around her parking space, plastered with "NO PARKING" signs (she works at the Post Office, I kid you not). Then there is the guy on the corner who, when liquored up, has a thing for old ladies. He's liquored up rather a lot, and in fact, even calls the cops on himself sometimes. I've heard he tells them "I've had a few, I think I might be gonna do something. You might want to come get me now, save yourselves some trouble later." And they do!


I'm sure you are wondering why we put up with this, why we don't just move. Well, frankly, because we can't really afford to go anywhere better. Anything else in my meager price bracket is going to have issues of some kind or another. The last place we lived, for example, we had the elderly neighbor who used to "forget" to put his pants on before going out (we'd often find him in the backyard on a weekend morning) and there was somebody, although I never confirmed who, who every now and again would get liquored up and start shooting guns off in back in the woods. When we'd hear it I'd call the police, and the dispatcher would usually say, in a blase tone of voice, "Oh he's at it again, is he? Well, we'll go over there and check it out. Thanks for letting us know." Business as usual, apparently. So wherever we go, I know it would just be a matter of trading one kind of crazy for another.

To tell you the truth, most of the time I enjoy a little bit of crazy--it keeps things interesting--but crazy is like a condiment, it is best enjoyed in moderation. When it becomes the main course, well, that's when things get dicey. Mrs. Pink hair, for example. Her chicken-wire antics would be amusing, if she kept them on her side of the complex. But for some reason known only to herself, she has decided that my family is the anti-christ. If anyone comes here to visit or drop one of us off, she will call the police if the offending vehicle tries to execute a k-turn too close to her fence, of if they pause too close to her house while they look at the apartment numbers. She mutters under her breath about "hoodlums" whenever my son walks up the driveway, and she's put angry notes on our door, letting us know that she's "watching" us.

Mr. Liquored up on the corner has exceeded his entertainment value, too. Last fall he went on a bender and tried breaking down the door of the elderly lady across the driveway. The police came and manhandled him off to the clink, but she was too afraid to sleep in her own home for almost two months. He's never bothered me, but I give him a wide berth whenever I see him now. But the bloom was finally off the rose for good when the police condemed our house, because the person downstairs was a hoarder. Luckily, they let us back in, since our apartment is separate from hers, but we had to live with a gynormous dumpster out front, blocking the door, for weeks on end. To add insult to injury, the landlady (who is herself the offending party) put us on blast recently because she didn't like how our garbage cans and recycles looked at the side of the house. Nevermind she's let the grass grow up waist high, let alone the hoarding issue, it was our recycles that were at fault. Needless to say, we had words over it.

Hopefully the dust up over the trash cans is now behind us and won't come up again, but if it does I don't know how long we'll stay here. Ideally I would like to avoid moving until I absolutely have to. In another year and a half my son will be going into the service, and my plan was to stay here until then. My landlady is a nice person, when she's not obsessing over my recycles, and we actually get along very well. But even I have my limits and when I'm done with something, I'm done. Another episode like this one and I think it might be time to start perusing the classifieds. If/when we do leave here, I'm sure some kind of crazy will be awaiting us wherever we go. Hopefully, just a little less of it. 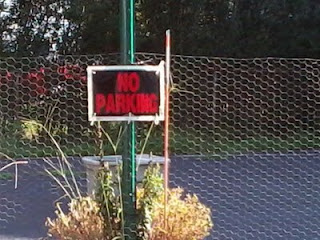