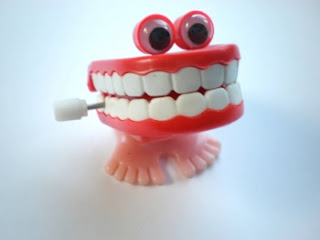 We were out to dinner one night recently, trying out the new diner in town, when I thought I heard Big Brother say "Wait, are those dentures?" At the time I was trying to get Baby Brother to stop climbing out of his high chair, so I was only vaguely aware of the pandemonium occurring in the adjacent booth. I turned around to look and sure enough, there were a pair of dentures sitting on the table grinning up at a giggling huddle of squeamish teenage waitresses. Just then the owner of said choppers re-appeared; Without a word the elderly owner scooped up her missing teeth, put them back in her mouth and stalked off as if the whole thing were just business as usual.

Normally, I would have found this episode extremely entertaining, but as everyone around me was falling over laughing, I was feeling more than a little unsettled. The more I thought about it, the more I realized the incident was reminiscent of that scene in "A Christmas Carol," the one where Scrooge is shown the unpleasant future that awaits him unless he makes major changes. In one of those strange moments of clarity that come out of the blue, I suddenly realized that despite all my introspective blogging and pipe dreaming about sailing off into the sunset someday to write, if I didn't figure a few things out in the here and now, and come up with more of a concrete plan, I was going to wake up one day to find myself used up and worn out, sitting by myself in a diner with only my dentures grinning at me across the table for company.

After more than a year of blogging I still hadn't answered the question of where was I going with it. I started the blog at a time in my life when, literally, I felt very much like a car stalled in the slow lane while everyone else sped by me. Blogging seemed like a way to explore where I wanted to go next in life by doing something I loved, writing. Slowly, blog post by blog post, I began to peel back the layers of job titles that were how I defined myself - Mom, Executive Director, Tradeshow Coordinator, Designer, Waitress, Volunteer, etc., etc. - to figure out who I was underneath. Little by little, I began to think of myself in terms of adjectives, not job titles, associating myself with words such as "creative," "strong," and even "funny." A  more authentic image of myself as a person began to emerge and, with it, a nebulous new sense of what shape the future might take. I started blogging more about writing, exploring what creativity meant to me.

Just when I was starting to feel pretty good about where things were going, both on the blog and in life, foster care came along and kicked the stuffing right out of my newly minted sense of self. My fragile little identity got crushed to pieces under the hefty new title they gave me to add to my already prodigious collection: Resource Parent. My leisurely introspection went right out the window as I found myself consumed with the mechanics of filling the needs of other people all over again. The newly emerging me put up a valiant fight, but was slowly disappearing, being obliterated by the long hours and emotional stress of caring for traumatized children. Even my blog, the one little corner of cyber space that was supposed to be mine and mine alone, had became mostly about the kids. I wasn't blogging as me anymore, I was blogging as a foster parent. Once again, my job title was hardening around me like a shell, covering up all the things about myself I had been trying so hard to uncover and let out into the world. I love the kids and I enjoyed blogging about our journey together, but as time went on I was losing more and more of myself in the process. I knew that had to stop.

That evening, after the kids were in bed, I shut my blog down, deleted my URL from my email signature, and put away the other creative writing I had been working on. I needed to sit with it all awhile, figure out how I was going to combine being a second-time around mom--with the uncertainty of foster care thrown in--with what I needed to make my own dreams and future goals into a real possibility. I knew I needed more than just a few hazy thoughts about what I might like to do, I needed a real plan of action. This was too important to screw up, especially since I didn't have another couple decades to spare focusing only on child-rearing before I thought about my own future (my so-called strategy the first time around).

So, a couple of months later, here I am back again. I've figured some things out, made some decisions, and I'm ready to take action. Finally, thanks to a rouge pair of false teeth, I have a new sense of direction. I'm still living life in the Slow Lane so I know there will be a few unanticipated jug handles here and there, but at least I'm no longer endlessly circling the roundabout.

I'll tell you more about where my journey here in the Slow Lane is leading in my next post. In the meantime, don't forget to floss; Those dentures looked anything but comfortable.
Posted by Kelly Ospina at Thursday, May 23, 2013

Email ThisBlogThis!Share to TwitterShare to FacebookShare to Pinterest
Labels: Strategy and Planning