My Inner Narrator Tells the Tale

One of my earliest memories is of pre-school, riding a very heavy tricycle around the perimeter of the playground, while narrating the experience in my head. "Now I push the pedals, now I hold on tight, now I go, go, go!"

The narrator in the back of my head was always there, and still is. I may not have known, at age three, what a writer was, much less that I wanted to grow-up to be one, but on some level I always knew that my life was a story and I was the protagonist.

In the small country grammar school I attended half the kids came from farming families. Many were related to each other in some way, if not by blood then by marriage, while the rest of us were recent transplants from "the city." I was a young kindergartener, small for my age and painfully shy. I was an equal opportunity victim, an ideal target for bullying by both the farm kids and the kids from the new housing developments. The sense of being an outsider only heightened my feeling of being a narrator, watching the world from the outside and commenting on it in a secrete inner monologue.

It is no wonder, then, that reading and writing became my salvation. While other kids dreaded the book report, it was my homework of choice. Uninterrupted silent reading on Friday was sure to elicit a groan from most of the class, but was my favorite lesson of the week.

One of my best memories of being a small child is my mom reading to us, my sister snuggled on one side of her, I on the other. As I grew up I lived in books, literally. During summer vacation my mom took us to the county library every other week. I checked out fourteen books at a time, the maximum allowed by the children's librarian, and read every one. Usually I was out of books again well before the next library run.

My mom is herself an avid reader and she passed that on to my sister and I. She, in turn, acquired her love of reading from her own mother. My grandparents bookcase introduced me to Dickens, Shakespeare, D.H. Lawrence and Agatha Christie, among others; Paperbacks were a favorite haul during my grandparents weekend garage sale forays and were stashed in every nook and cranny in the room I shared with my siblings when we visited.

At home my parents bookcases were filled with an intriguing assortment of how-to books. How to organic garden, how to live off the land (it was the 70's, after all), how to repair bicycles, how to sell anything and everything. The message was clear: If you needed to know how to do a thing, the answer lay in books. 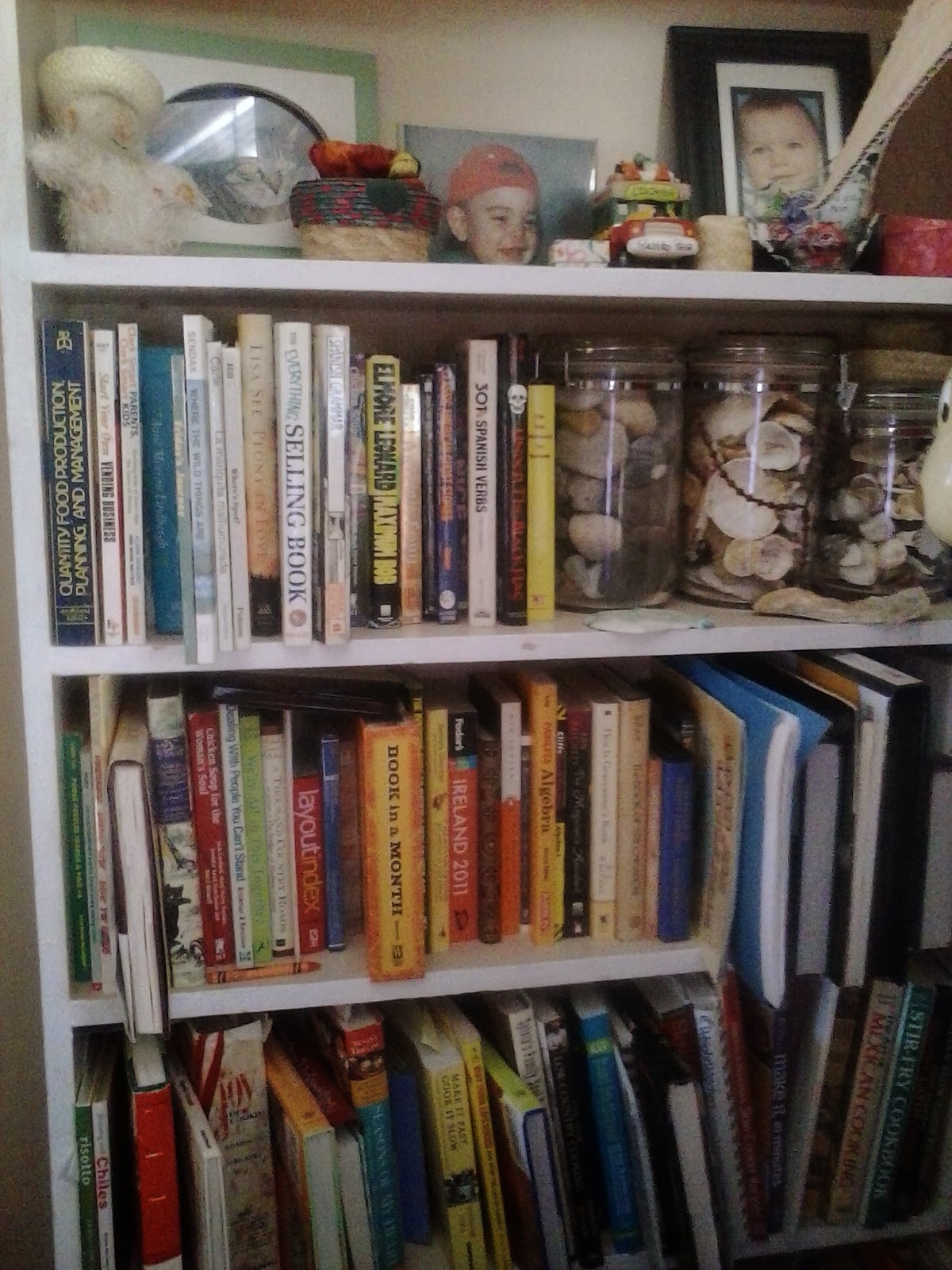 Today my own bookcase is a similarly eclectic mix. As I grew up and became a wife and mother I developed a love for cookbooks. I have many, most of them inscribed "To me, from myself, just because I can." Gladys Taber and Zarela Martinez are two of my favorite cookbook authors, both of whom were/are not only stupendous cooks, but wonderful story tellers whose medium of choice just happened to be food.

One day I hope to see a book with my own name on the spine sitting on the shelf. It is a goal I both cherish and fear. I siddled up to it for years, guarding myself against the possibility of failure by not taking the risk to begin with. At forty-six I'm finally old enough, and secure enough in myself, to realize that the only true failure is in not trying.

My inner narrator is still hard at work, this time telling the story of an aspiring author . . . "She sits down at the computer and starts to type . . . "
Posted by Kelly Ospina at Saturday, February 22, 2014

Email ThisBlogThis!Share to TwitterShare to FacebookShare to Pinterest
Labels: Heart and Soul, The Writing Life