In an earlier post I mentioned one of my cost-saving strategies was going to be to start a meal swap club. Not just to save money, but also to save time and to ensure we eat well even on busy nights.

I decided to do a test run, to see if bulk cooking was something I felt I could keep up with if this got off the ground.I planned my menu, did a shop, then got cooking.

The three entrees I decided on were veggie lasagna roll-ups, meatloaf patties (to make it easy to freeze individual portions), and two kinds of pot pies (tofu and chicken). I picked these three things at random, mostly because I thought they would freeze well.

The cooking wasn't too bad. The hard part was having three different meals going at once. 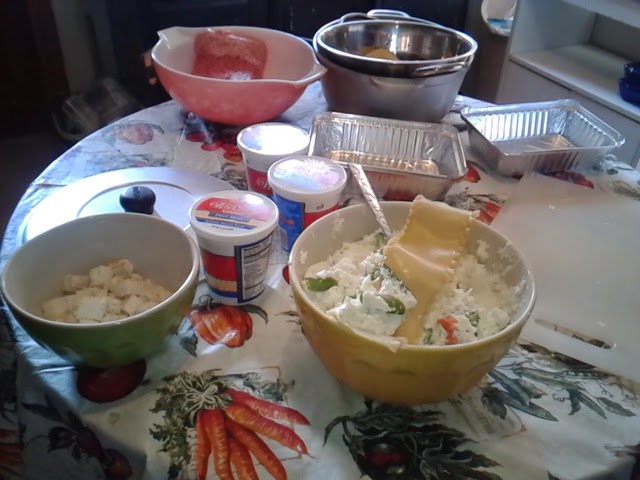 Once I got into a rhythm, it wasn't too bad. After the first entree was finished and packaged the rest seemed to go quicker.

All-in-all, it took me about three hours to do all the preparation, plus the cooking and packaging.

Unfortunately, the idea of a monthly meal swap group didn't really take off. My social circle isn't that big and not enough people were interested, but I am still cooking a few extra meals for the freezer each weekend. I love not having to worry about dinner during the week, and I'm having fun planning multiple meals around a theme ingredient. Last week it was chorizo, this week it will be fennel.

Whether cooking to swap or just for us, planning meals in advance saves money. Cooking over the weekend gives me time to try new recipes I wouldn't attempt on a work night. But there was one reason, in particular, why I've kept it up, something I discovered in the days after that first test run: Because I wasn't spending so much time on week nights preparing dinner, I had more time to linger over each meal with Big Brother. And that, my friends, is priceless.

If you need a reminder once in awhile to slow down and pace yourself read taking it slow in the slow lane.
Posted by Kelly Ospina at Monday, July 28, 2014

Email ThisBlogThis!Share to TwitterShare to FacebookShare to Pinterest
Labels: Dollars and Sense, Home and Family, Strategy and Planning